While it is common knowledge that the Bengali cuisine is heavily reliant on the bounties of the river and the sea, many don’t identify vegetarian cooking as part of the Bengali fare. This is far from the truth really, and as my husband frequently loves to say, if it grows, Bengalis will eat!

I am no food historian, but as is common knowledge, two significant things contributed to the wide variety of Bengali vegetarian dishes. Firstly, prior to the Bengal renaissance, widows were treated pretty badly and had strict dietary restrictions. Non-vegetarian items were strictly prohibited, and so, a wide variety of vegetarian dishes were necessarily a part of the diet. Secondly, the Bengal famine together with the forced cash crop production during the British rule, resulted in the use of all scrap material. Stems, leaves, peels and skins were all tastefully incorporated in Bengali cooking to ensure zero wastage. The forced poppy seed production also led to the incorporation of poppy seed paste in Bengali food habits, which is now a delicacy.

While neither of these events were remotely happy, what emerged as a result of this bleak history, was a diverse cuisine, using ingredients and produce, that are not always commonly used in other Indian households. I have grown up eating (and loving) things that are unheard of, including stir fried potato skin with poppy seeds, bottle gourd/calabash skin and water lily stems, to name a few. My grandmothers, aunts and my mother excelled in these recipes and I try to use their methods and to keep the recipes as authentic as possible.

Chorchori is a mixed vegetable recipe, made with the discarded stems of the cauliflower or red amaranth or Malabar spinach. I used my mom’s recipe and slightly tweaked it by adding spinach and turnip. Avid the turnip if you hate it as much as my mom does. This is healthy, delicious and perfect for lunch!

For the mustard paste: 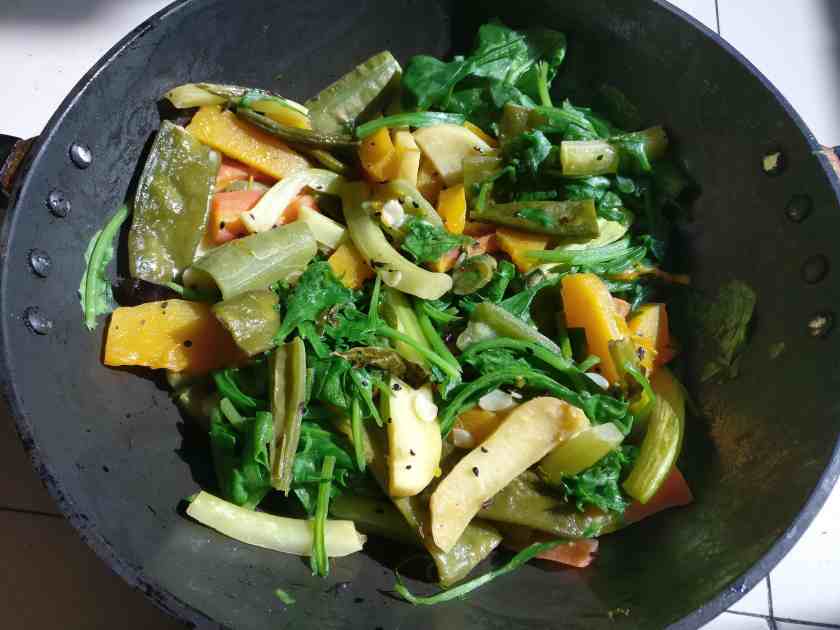 Grind the mustard seeds (black and yellow), green chillies and a pinch of salt with a couple of tablespoons of water. Add a little more water if the paste is too grainy. The paste should be smooth and thick. Keep aside.

Heat the mustard oil in the wok and add the panch phoron and dried red chillies until it splutters. Add all the vegetables, except the spinach. Stir gently, cover and cook on low heat for about 10 minutes, stirring occasionally.

Add the spinach, sugar and salt to taste and cover and cook for another five minutes. Check if the vegetables are almost done at this point. They should be cooked through, and not al dente.

In a bowl, mix one tablespoon of the mustard paste with a tablespoon of water to make a slurry. Add the mustard slurry to the wok, stirring thoroughly and adjust the salt if required. Cook on medium heat for another two minutes and serve. 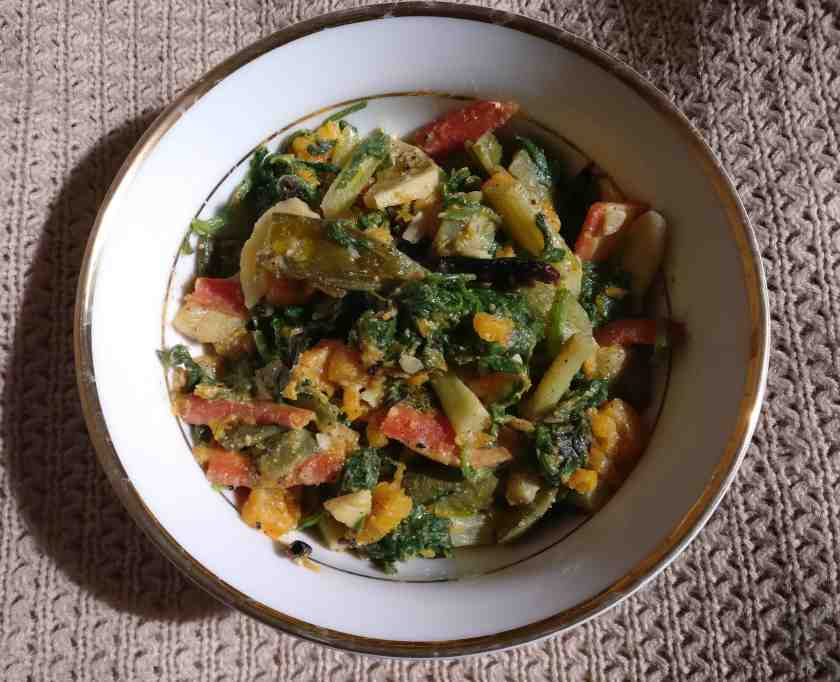 I have not written a blog post for almost a year. We moved back to Delhi earlier this year, change offices and houses (of course) and have been crazy busy as usual. I was pretty surprised to realise that I have come to really like this city and actually missed being in Delhi. So now, I call Calcutta, Bombay and Delhi my home. Weird.

Enough about me. About food now.

This recipe is about my love for Bengali food. This is the most common (and commonly loved) fish curry that you will find in any Bengali household. So, while this recipe is not unique, this is the first time I actually measured out the ingredients, since I usually always make this curry the way my mom taught me – instinct! Well, actually she is a fantastic cook and like all mothers, is fabulous at creating amazing food by just a pinch of this and a handful of that, but I know how difficult that is to follow.

So I hope you enjoy this quintessential Bengali fish curry that is both comforting and delicious. 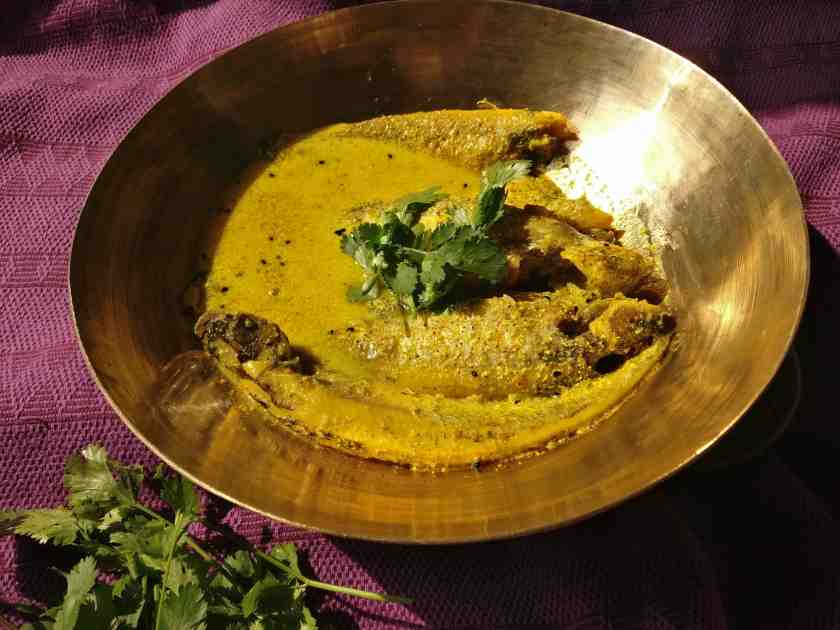 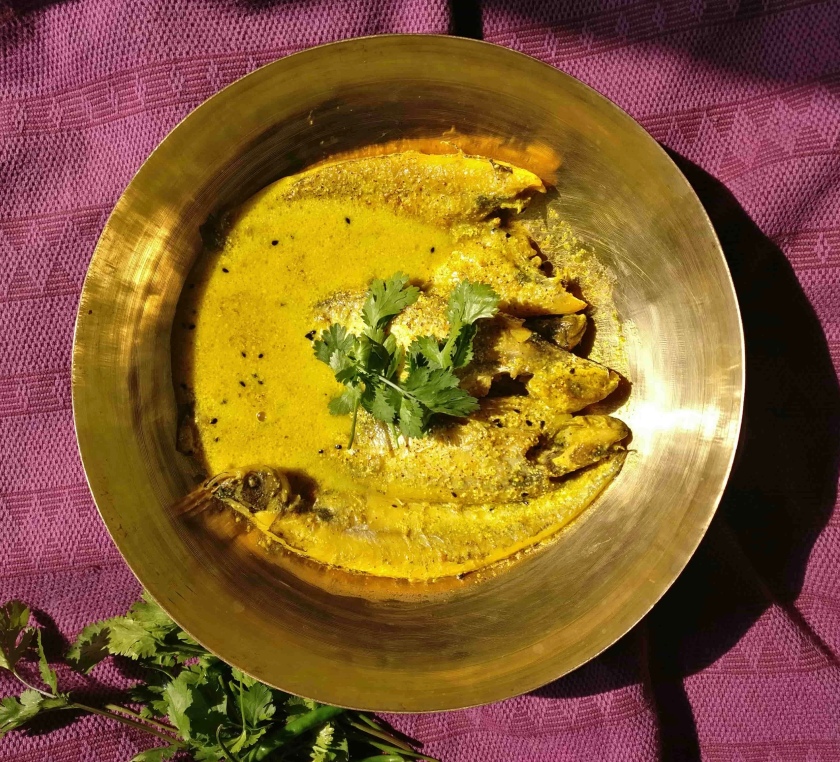 Grind the mustard seeds (black and yellow), green chillies and a pinch of salt with a couple of tablespoons of water. Add a little more water if the paste is too grainy. The paste should be smooth and thick. Keep aside.

Clean, wash and drain the excess water off the fish or dry with paper towels. Sprinkle 1 teaspoon of turmeric and 1 teaspoon of salt and coat evenly.

Heat three tablespoons of mustard oil in the non-stick wok. Make sure that the oil is adequately hot (the colour should become slightly paler) but not smoky. Shallow fry the fish (one/two at a time, depending on the size of the fish) for about 30 seconds on each side, and keep aside.

In the same work, add the remaining mustard oil. Add the nigella seeds until they begin to splutter.

Mix the mustard paste and ½ teaspoon turmeric with 1 and ½ cups of water, and add to the wok. Gently add the fish and bring to a boil. Cook on medium heat for approximately 12-15 minutes. Adjust the salt to taste.